Continuous Integration (CI) and Continuous Delivery (CD) are some of the cornerstones of modern and reliable software engineering practices. To iterate quickly on the software, engineers push code as often as possible to their main Git branch (branch shared by all the teammates). The CI process automatically tests the pushed code, by running unit and integration tests, to avoid any future challenges. After the team has decided that their new code is ready to be deployed to production, the CD process automatically deploys all the changes after they've been tested in the production environment.

For a CI/CD process to work efficiently, the engineers often work and test their code in multiple different environments. A common example is a setup with three stages: Development, QA, Production.

Those practices have been applied to software engineering for many years now and enabled a lot of organizations to deploy reliably their code even many times a day! However, even today, the vast majority of data practitioners are still struggling with operationalizing their code.

This has been mostly caused by difficult to work with formats (like notebooks or proprietary ETL binaries) that aren't easily versioned and stored in Git, and lack of access to well-modeled synthetic data for lower environments. Additionally, data users are often not used to working with technologies like Git which can have a very steep learning curve. 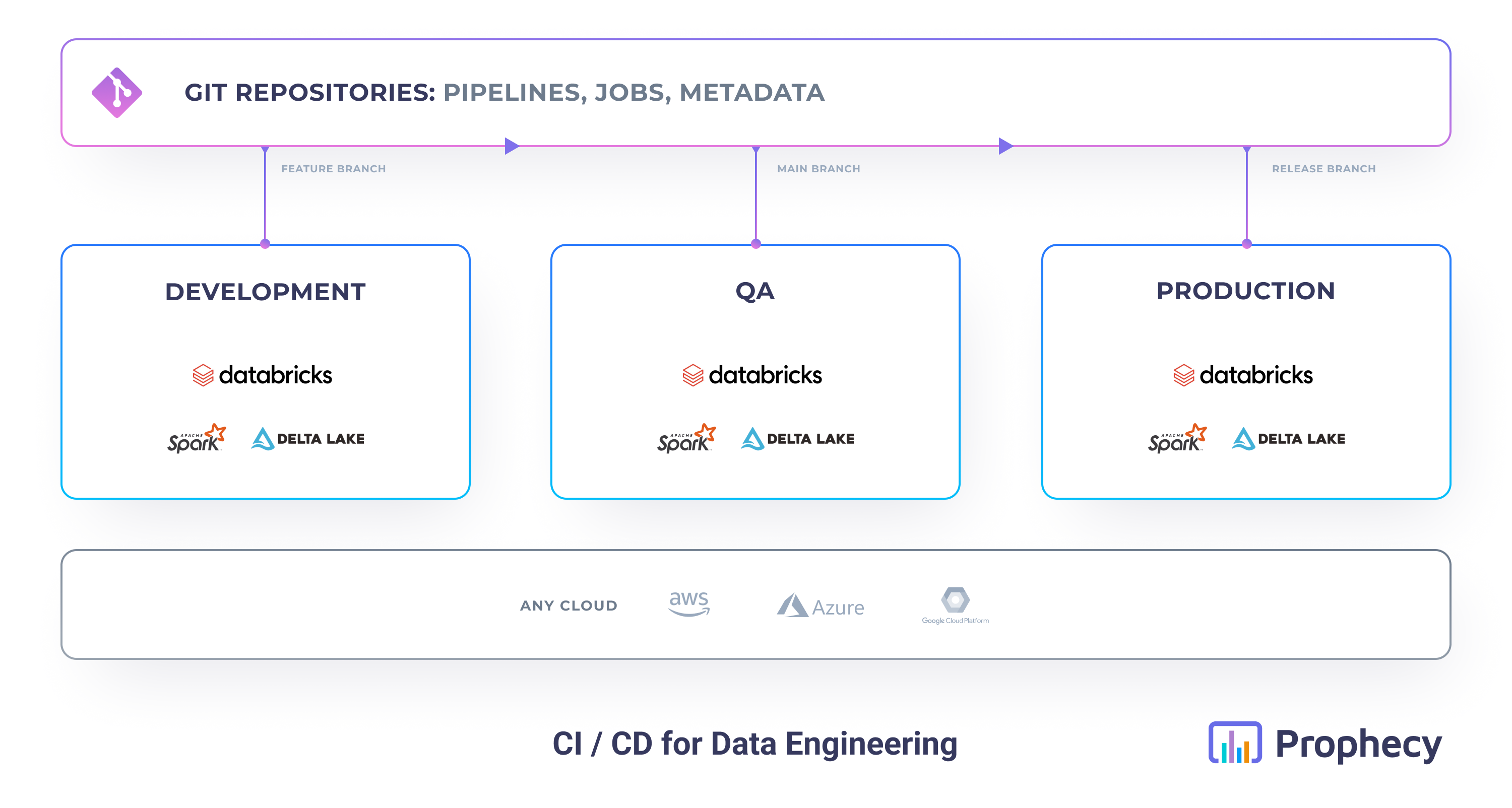 Here comes Prophecy! Since Prophecy works very similarly to a code-based IDE with an additional low-code productivity layer, all your code for data Pipelines and Jobs is directly accessible to you and stored in Git. This enables any data practitioners to leverage the best DevOps practices easily.

First of all, let's consider, the simplest scenario, where you have only a single execution environment (e.g a single Databricks workspace). In those cases, usually, everyone on your team has access to that environment. Everyone does both the development and productionization of your Pipelines in the same place.

In Prophecy, at minimum, you will find yourself having:

This is great for simple setups and very small teams, but can quickly lead to many problems. In such a setup, it's very easy for you and your teammates to make mistakes and accidentally affect production Pipelines. There's also lack of data separation, so any PII information becomes visible to everyone!

A better approach is to have physical environments, connected to different stages of development. A common example is a setup with three stages: Development, QA, Production. Each environment has usually its independent data, metastore, clusters, and even permissions.

Let's consider a better alternative to a single environment development.

Why so many environments?​

By separating your development or QA use-cases from your production use-cases, you get:

If you'd like to involve more stages, to even further increase the reliability of your development process, you can add a QA environment. That environment should have data, hardware, and software that closely simulates the Production environment (e.g. data slices directly taken from production), and should serve as a holding area. Using QA, your engineers make sure that the jobs are going to run smoothly in the production environment, without actually potentially breaking production, if some code is wrong. 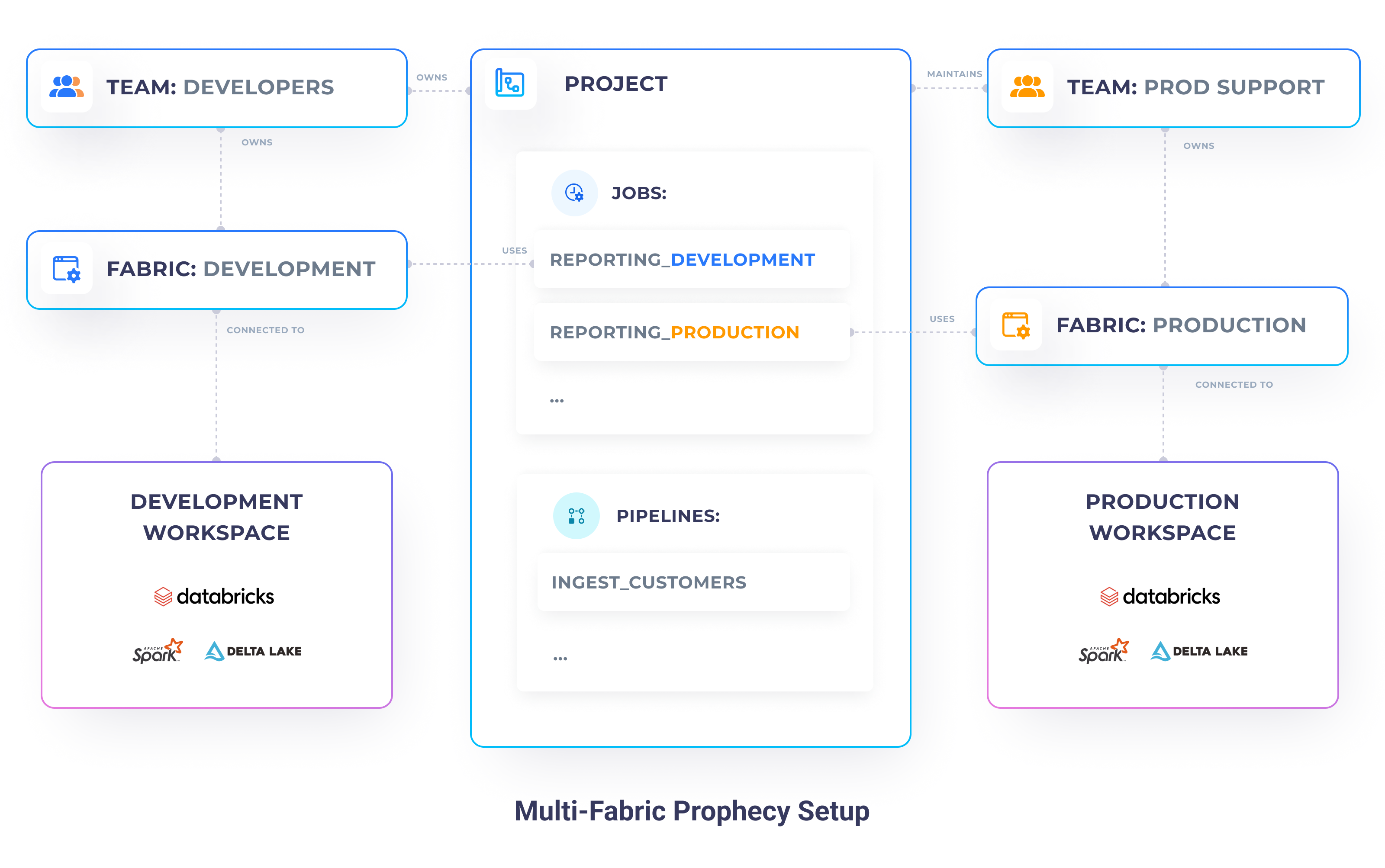 For our example, however, let's focus on a setup with two environments: Development and Production. Our Development environment is accessible to our whole organization (developers, analysts, support) and is connected to our development Databricks workspace, which contains only dummy customer data. Whereas, our Production environment is only accessible to our production support team and is connected to our production Databricks workspace, which has real customer data.

Phew, that was a lot of work! But the biggest chunk is behind us 💪.

Now that we have set up our Fabrics and Teams, built some Pipelines, it's time to test the whole data flow on our development environment.

Testing your Pipelines and Jobs is very simple. Simple click on the play button and watch your code run!

Note, that currently, we're spinning up a new cluster for each of the tasks, therefore your job might take a few minutes to complete. However, soon, you will be able to have granular control over which Pipeline runs on which cluster.

Once we're confident that our job works correctly, and we have tested it well, we can start deploying it to our production environment. In our setup, only a production support engineer can do that. Therefore, login as them, duplicate your job on the production Fabric, set appropriate Pipeline configurations and enable it.

That's it! Now you can commit any remaining changes and release your Pipeline. Prophecy automatically takes care of the release process, by building your Pipelines, running unit tests, and finally deploying the Pipeline JARs/wheels alongside the job definition directly to Databricks (or AirFlow).

If you're new to this process, check out, our Git and jobs deployment documentation.

So far, we looked at how Prophecy makes it really easy to deploy our jobs to multiple environments, directly using the CI / CD system built into it. However, it is often the case that you want to deploy your Pipelines from your Git instead. This enables you to have a more secure production environment, where it doesn't have to connect to directly Prophecy itself.

As we know, Prophecy publishes all the entities (Pipelines, Jobs, metadata, etc) directly on your Git. That means you can very easily deploy that code to whatever Databricks environment you'd like - very easily.